The Dowdy Ranch entrance to the massive Henry Coe State park is now seasonally open on weekends (and fridays, it seems) http://coepark.net/pineridgeassociation/planning-your-visit/visitor-centers-and-park-entrances/dowdy-ranch-visitor-center I was last there in January by bicycling from Bell Station https://alpharoaming.com/2014/01/20/henry-coe-state-park-pacheco-crossing-dowdy-ranch-bell-station/ With the road now open, Michael, Erin, and I decided to “see what we could” see!

We planned a loop from Dowdy, down into Mack’s Corral, up the creek to Pacheco Crossing, then up Scherrer, down Vasquez, and up Dormida. (Sounds like Coe: down, up, down, up…)

We arrived at Dowdy Ranch at 10AM. We saw Ranger Cameron Bowers preparing for next week’s “Backcountry Weekend” http://coepark.net/pineridgeassociation/pra-event-list/details/61-2014-backcountry-weekend We also quickly visited the “almost famous” Purple Panther sign!

I hope Backcountry Weekend is not rained-out like it was a few years ago. There’s a small chance of rain in the forecast this week, and if the roads are still wet or muddy by friday…Anyway, down we went towards Mack’s Corral, past a lightly flowing spring.

And bottoming-out at the nice meadow near “Mack’s Corral” and intersecting the “North Fork Trail”, which is the North Fork of the Pacheco Creek.

We walked along the creek trail, upstream towards Pacheco Crossing. We soon encountered the deepest pool of water along this trail. It appears to be year-round, with cattails, frogs, fish, and a pair of mallards that fled when they saw us. 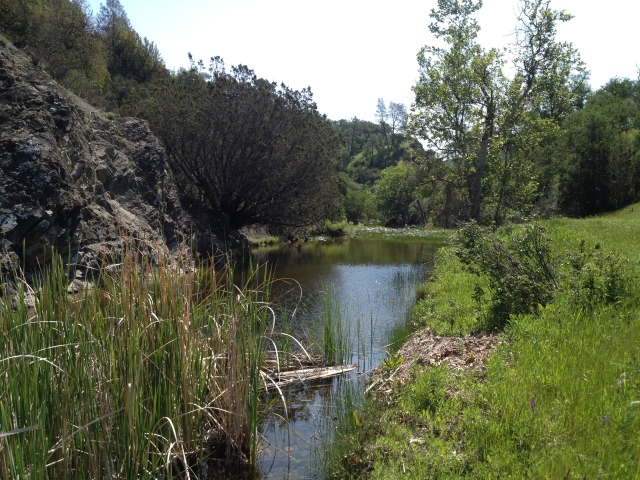 On our way to Pacheco Crossing, I kept staring at the ominous (but not really that big) Tie Down Peak, where I had a really big “oh crap!” moment in late 2012: https://alpharoaming.com/2012/09/26/rattlesnake-adrenaline-rush-tie-down-peak-at-henry-coe/

Upon arriving at Pacheco Crossing, I was happy to see a bit of water flowing through the large tube. 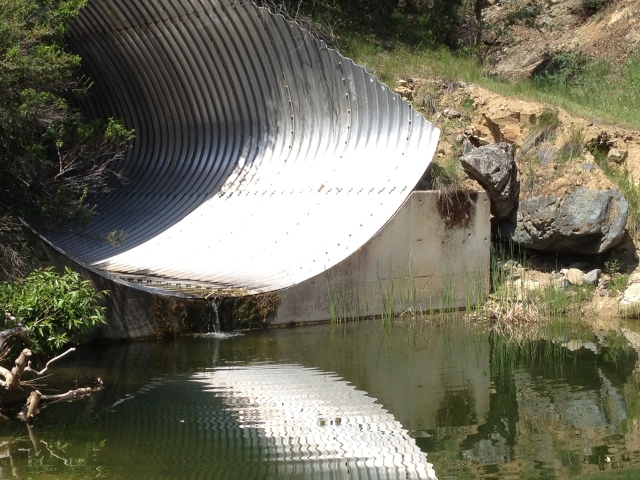 The “Hole in the Rock”, a few hundred feet upstream, was likewise full and gently flowing. During my last visit, in january, it was 6 feet lower than “flowing stage” https://alpharoaming.com/2014/01/20/henry-coe-state-park-pacheco-crossing-dowdy-ranch-bell-station/

From there, we slogged up the Scherrer Trail. It was my first time here, and steeper than Michael and Erin remembered. (Yes, we do carry the official Coe paper map, as well as downloaded topo maps on our electronic toys). The flowers all over the park were quite good. We wondered if the drought, followed by late rains, provided for better flowers than other years?

We then headed down the Vasquez Trail. It was quite steep, but nicely graded and not rutted. (Yes, my two companions are waaayy down there!)

We stopped briefly at the bottom, where the small creeks merge. There was a small amount of water flowing. We then looked carefully for our “exit trail”, the Dormida Trail, which can be tricky to locate and follow from either direction. We spotted the obscure trail, which concided with our downloaded “Open Street Maps” track, and up we went! These large downed trees made us think this area hasn’t burned in many decades.

In the distance is the Vasquez Trail, which we had just descended:

This is the trail…not as hard to follow as the last time I was here 5 years ago. That time I came from above and actually turned-back when I lost the trail where it dipped off the ridge towards the north.

Almost back! Here’s Dowdy Ranch, in the distance, from the Hersman Pond area.

We stopped in the Visitor’s Center for a few minutes on our return and chatted with Ranger John Verhoeven for a bit, then headed to the car.

That’s it! Give it a try, but be prepared with water, maps, and and steep hills. Henry Coe is big and can be unforgiving!