This past weekend I got my new Subaru dirty for the third time! I was interested in both the South Coast Ridge Road, which I could not do with my previous 2WD sedan, and Indians Road, which connects from Fort Hunter Liggett to Arroyo Seco. (I was here a year ago, when there were 3 closures on Highway 1 https://alpharoaming.com/2017/07/06/big-sur/  and 3 years ago, when I did a chilly winter hike to Cone Peak https://alpharoaming.com/2015/01/05/cone-peak/

Michael joined me on our 3 day, 2 night adventure. We headed down Highway 1 (the Pacific Coast Highway), through Monterey, Carmel, and Big Sur to our first planned stop in Gorda. (Did I mention the large numbers of tourists along the Big Sur coast? Some of them are amateur motorhome renters, and some of them walk into the roadway while thinking only about their next selfie.)

Gorda is as far south as you can go, before the “Big Slide”, where Highway 1 washed out last year, between there and San Simeon. We had lunch at the Treebones Resort, out on the deck, overlooking the water. http://www.treebonesresort.com/ 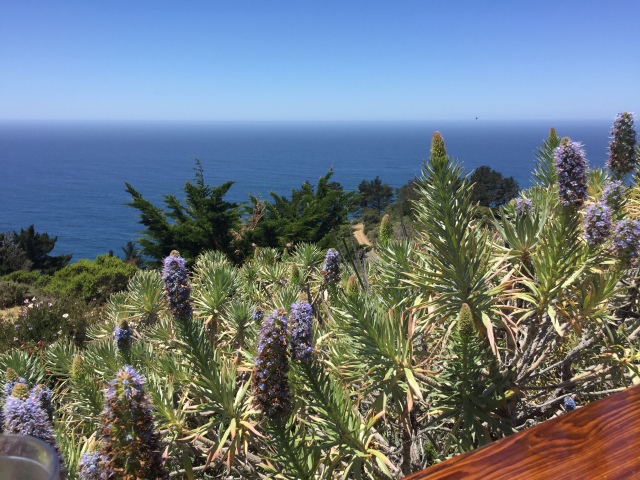 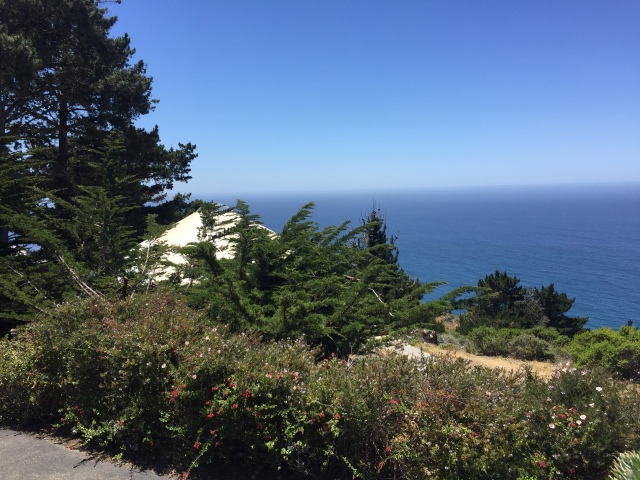 We made a quick gas stop, as we were about to go off-road for awhile, and the next gas stop would be 2 days later. (Yes, $6.59 a gallon. I bought 4 gallons! I’m happy they were there, and happy I was only “topping off”, just in case…) 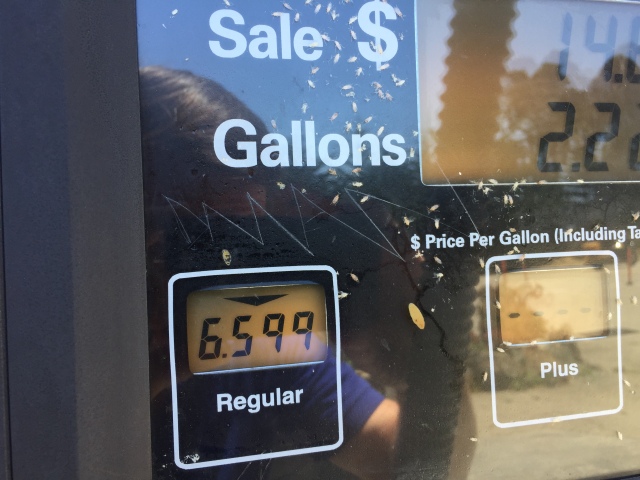 From Gorda, we headed uphill on Los Burros Road, then to the South Coast Ridge Road. About 3000 feet of climbing and 15 miles total on dirt Forest Service roads. (Los Burros Road was likely originally created to access the small mines and claims in a “mini Gold Rush” in this area. A few statistics: https://westernmininghistory.com/articles/550/page1/ …and an interesting story about the area, with many sequential links at left https://sites.google.com/site/hobbitmine/true-story-of-the-hobbit-mine

Below, we reach the top of Los Burros Road and turn left and start the rollercoaster ridge road: 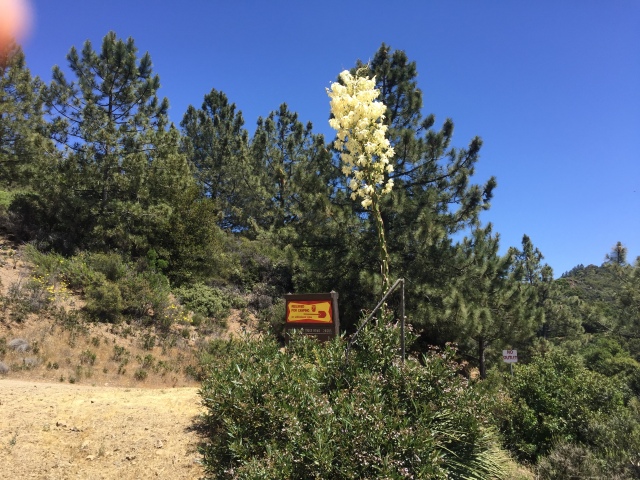 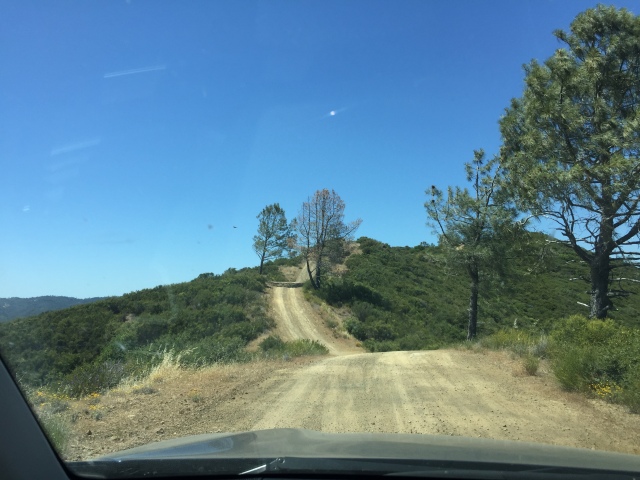 Most of the crud washed off the car…there are a few permanent scratches on the right side, but that’s what I bought it for! 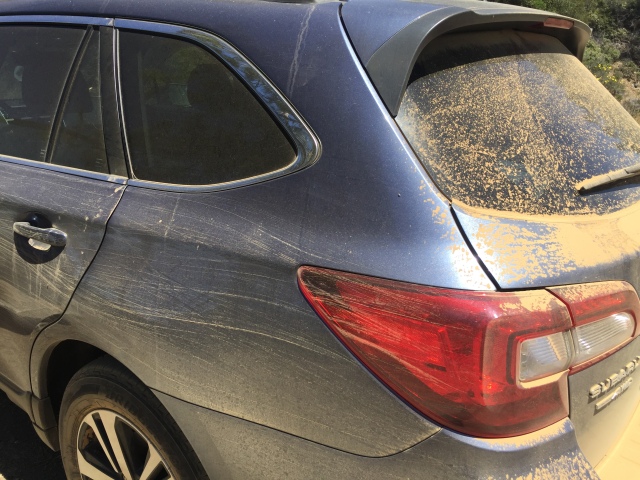 Below, is the sign describing where we had just come from, after we hit pavement at the top of Nacimiento-Ferguson Road. Prewitt Ridge was a place we considered for our first night’s camp, but it was fairly full and still early in the day. We kept moving! (We averaged 8 mpg on the dirt road.) 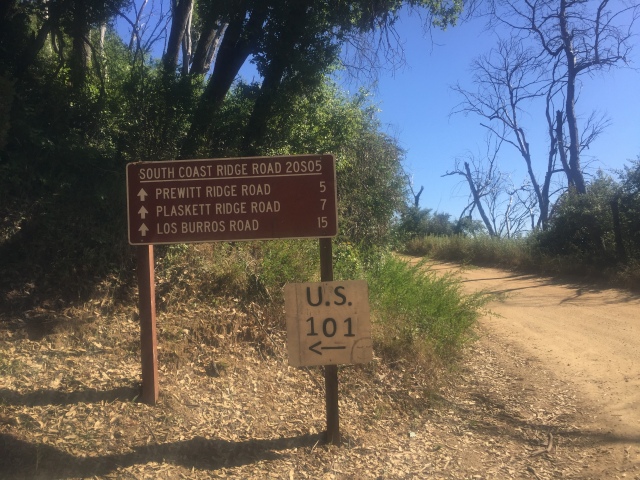 We drove through Fort Hunter Liggett, to Memorial Campground, and found a nice site. The next morning we drove a few miles further, through a seasonal gate, to Escondido Campground. From there we continued a mile or two on Indians Road, to the permanent gate that only allows hikers and cyclists for the next ~15 miles to Arroyo Seco. (The road was closed awhile back, after some landslides and a decision not to maintain it any more.)

Below is part of our hike, beyond the permanent gate on Indians Road. 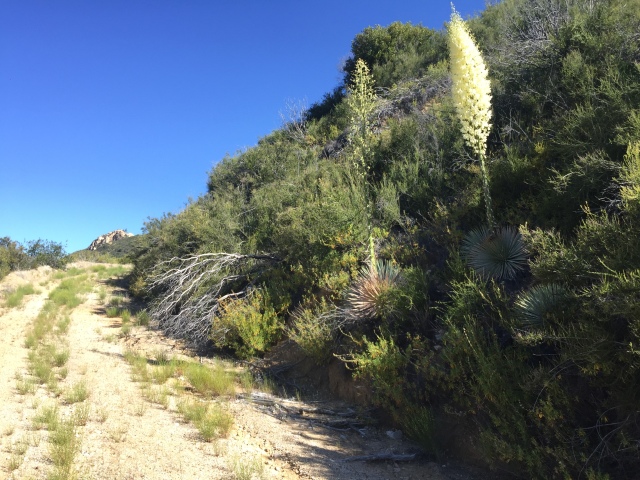 It was hot and dry, but there were quite a few flowers on the hillsides and shady areas, where a bit more water might be in the soil. 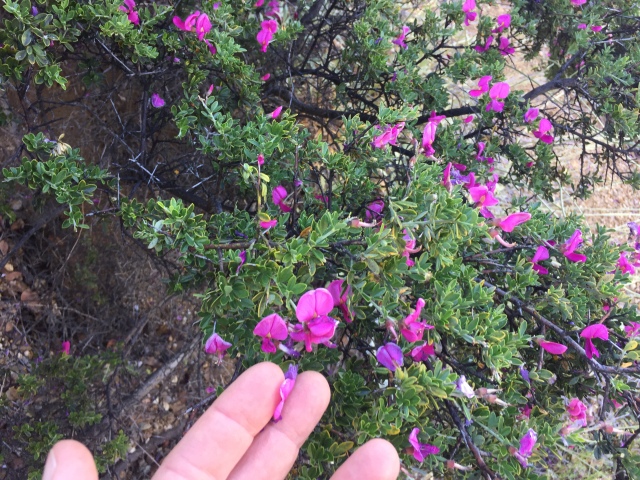 We climbed about 600 feet, very gradually, while seeing this lonely mountaintop pinetree get closer. 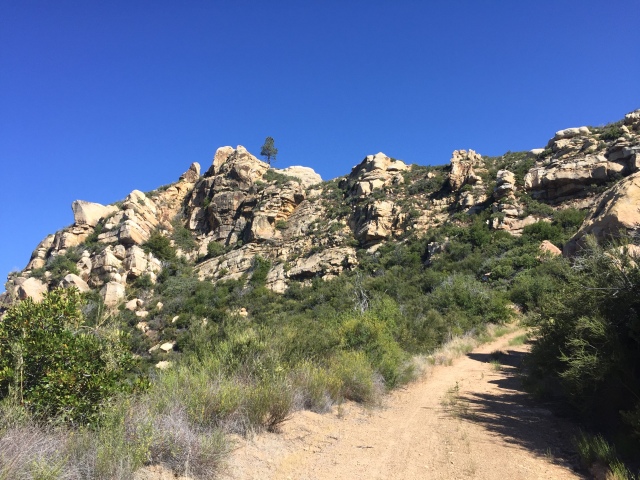 Following that hike, where we failed to find 2 geocaches that were not logged in over 10 years, we did another short hike from the Escondido Camground. 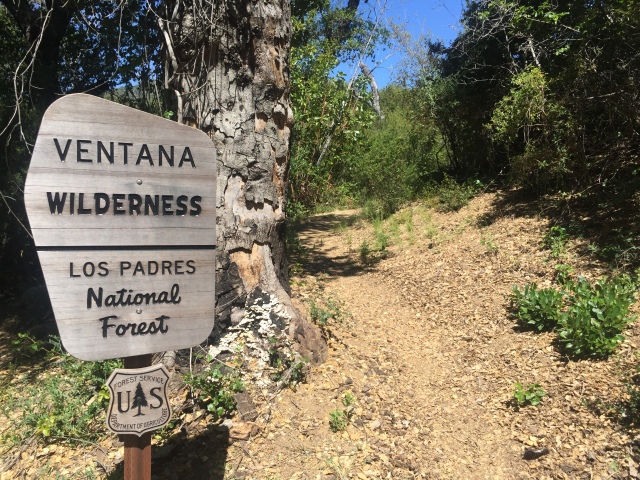 Two short hikes accomplished by late morning, as the temperatures headed towards 100F. We drove to the historic 1771 Mission San Antonio de Padua, which included an air conditioned Visitor’s Center! 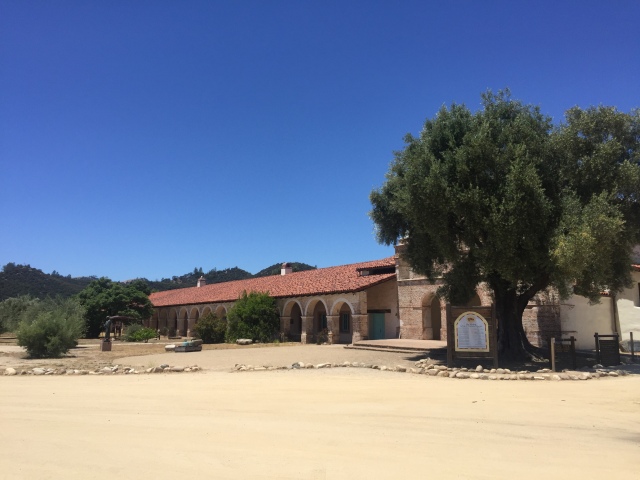 Inside, there was a museum, telling the history and displaying artifacts. This mission is particularly isolated, with the building and the grounds being well preserved. The grounds include a cemetery, a millrace and old millhouse. 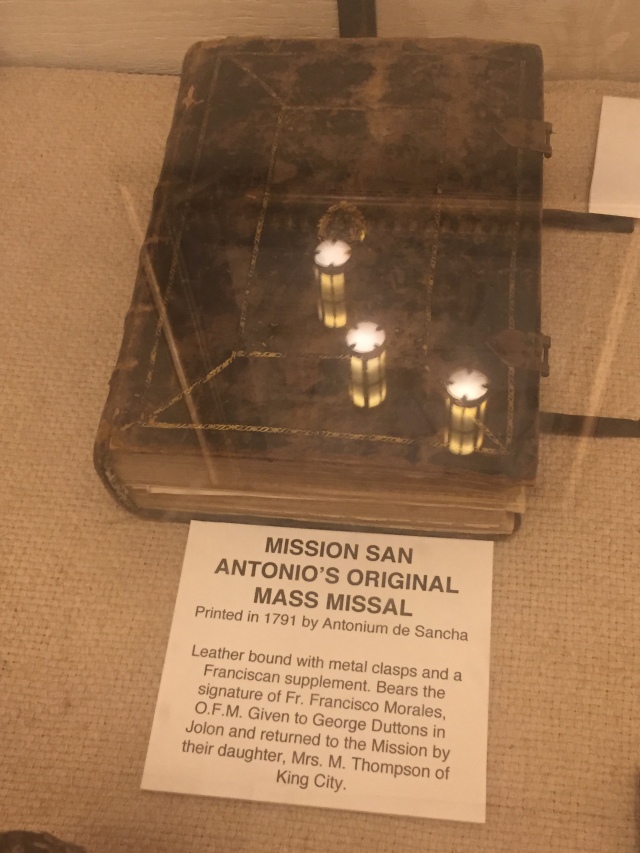 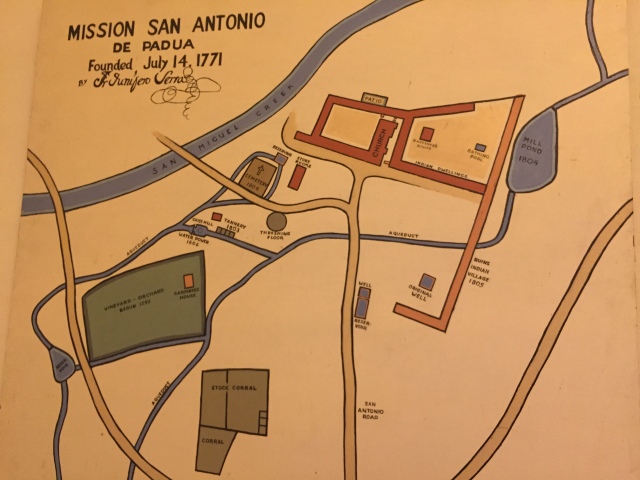 200+year old wine vat, in a lower level of the Visitor’s Center area. They had their priorities in order… 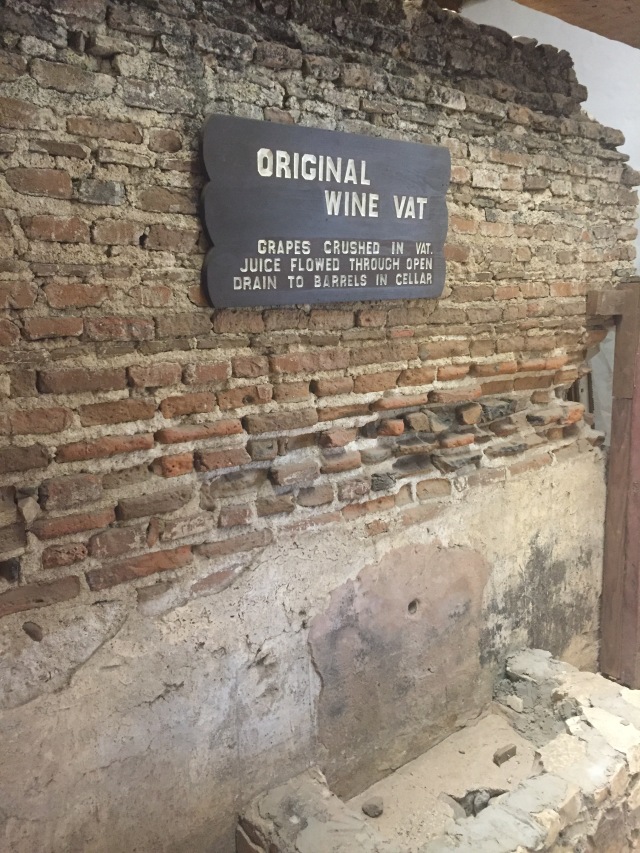 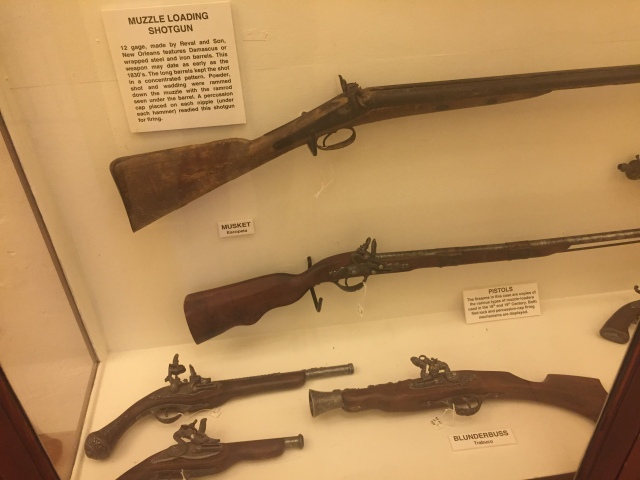 The inner courtyard, of a sizeable place! 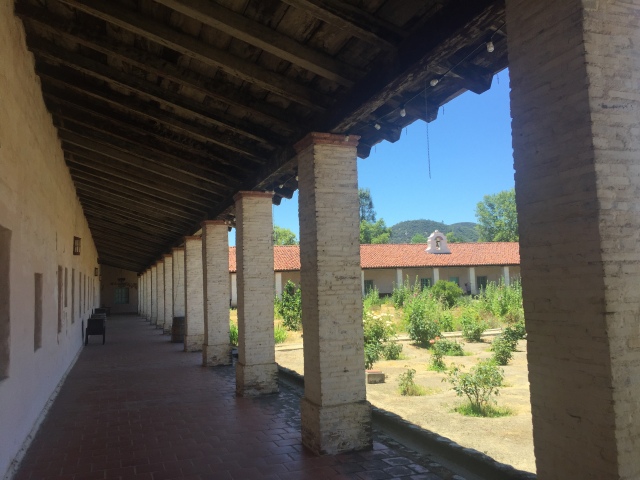 The interior of the chapel was restored by William Randolph Hearst in 1949. He owned the vast Army property, prior to WW2, including the Mission and his nearby large Hacienda. He sold it to the Army, during WW2, as a training ground for tanks. (The smallest road bridges, over the creeks, have a posted weight limit of 80 tons!) 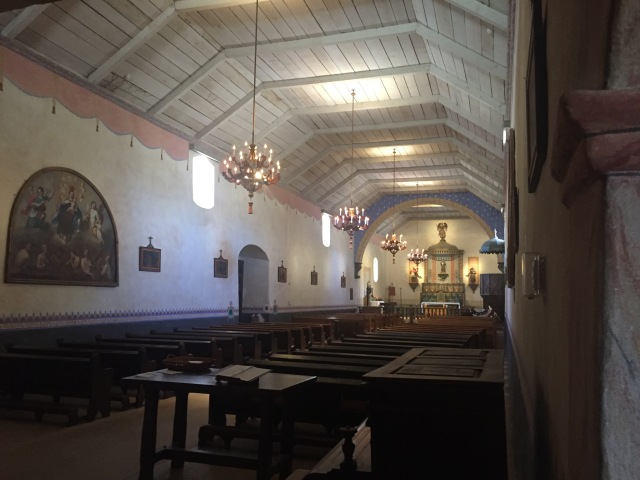 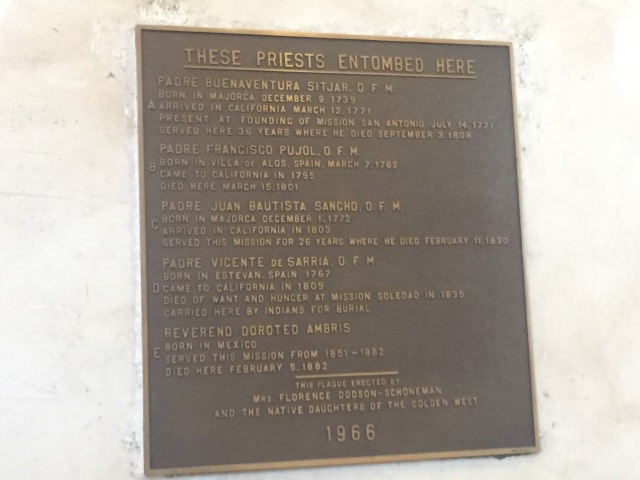 From there, we headed to Lake Nacimiento, about 25 miles south. It’s a boating and swimming lake, quite close to Paso Robles. We had an early dinner there, then camped back not far from the previous night, at the Nacimiento Campground. The third morning we headed down Nacimiento-Ferguson Road, into the coastal fog bank, and headed back up the coast. 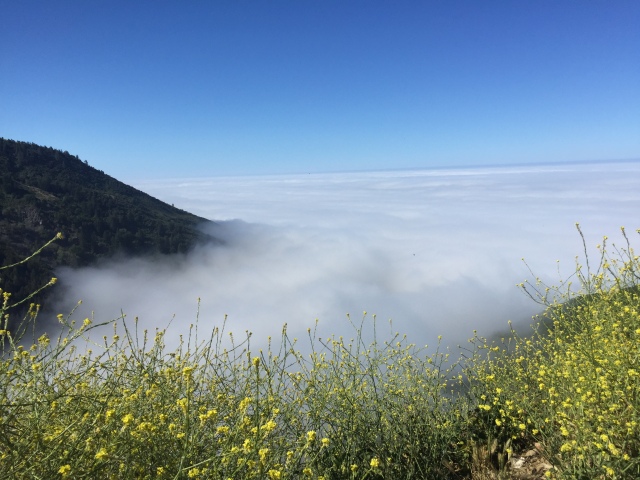 About 1/2 mile from the Mission, within the barbed wire center of the Army Base, is Hearst’s historic Hacienda. It’s possible to book one of the ~10 rooms, but securing a reservation is really difficult! Maybe some day… https://en.wikipedia.org/wiki/The_Hacienda_(Milpitas_Ranchhouse) Reservations for the general public: https://hunterliggett.armymwr.com/programs/historic-hacienda

That’s it! Remember to fill your tank before Gorda and have fun.!