Posted on September 29, 2014 by AlphaRoaming

Back in January 2013 I was doing a little off-trail excursion in the hills above Cupertino, CA. I was following an old, overgrown, unmarked road just to see where it went and as a possible shortcut to another marked trail. To my surprise I suddenly came across a clearing with a bunch of headstones!

I poked around a bit, after the shock started to wear off, and decided they were moved there…I had not stumbled upon an old cemetery!

Some of them appeared to be errors or “rejects”, like this stack of pink-ish ones.

Others, on the other hand, clearly looked like they were quite old and of historical value.

Loved ones and lost family members 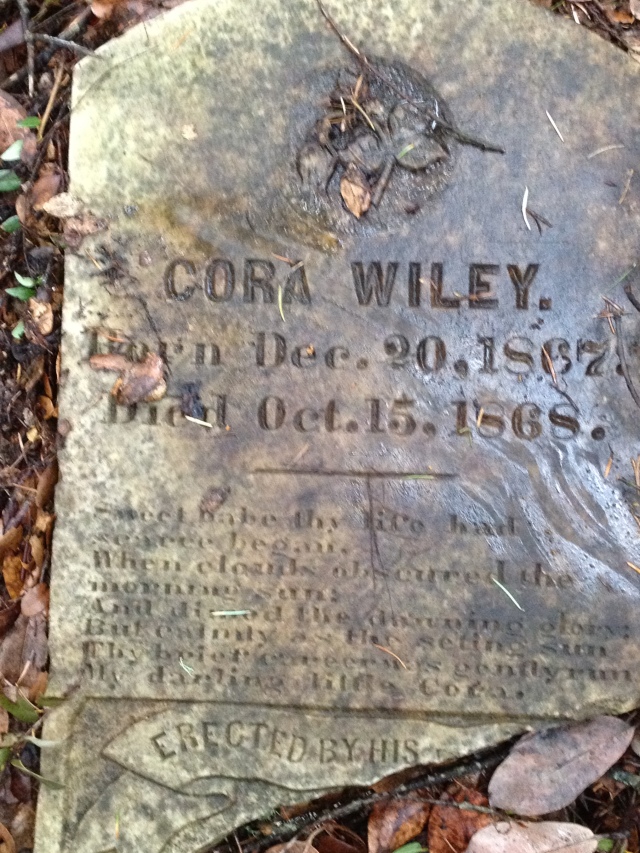 …and even some that may tell the story of pioneer families of our area.

Why were they here? Well, I took these photos and promptly did a little e-mail “Q & A” with the Midpeninsula Open Space District (http://www.openspace.org/), on whose land I found these. They knew the stones were there, but believed them all to be “scrap” that the previous landowner had planned to use as landscaping or building materials.

Based on the age of some of these stones, I had to disagree! Mid-Pen was great, in that they were very open to a historical society or researcher working with them to identify and relocate the important ones. I had heard of “The California Pioneers of Santa Clara County” http://californiapioneers.com/ and their prior efforts to return gravestones to their proper location.

I quickly received an enthusiastic response from The Pioneers, who picked-up communication with Mid-Pen where I left off. They organized a cooperative venture with Mid-Pen to assess and photograph the headstones. I paid my annual dues to join the Pioneers and joined the enthusiastic assessment party.

Following the joint visit, The Pioneers rolled-up their sleeves and dug into some great research work. They were able to identify that several of the oldest ones had been removed from the historical Oak Hill Cemetery in San Jose http://en.wikipedia.org/wiki/Oak_Hill_Memorial_Park

UPDATE: MidPen decided it was time to move the headstones, just over 2 years after my “discovery”. Oak Hill Cemetery, where some of the most historical ones were traced to, expressed a lack of interest unless they were contacted by relatives (of people that passed away 100+ years ago!) The Pioneers, through their hard work and contacts in the community, found a place Santa Cruz County that could offer long term storage.
In July 2015 MidPen and the Pioneers organized a work party to move the headstones. Some were clearly scrap, and the rest were put into storage. Additionally, one 19th century stone was returned to the descendants in San Jose, and one that was placed by E Clampus Vitus in 1961 was returned to them. Excellent work!

UPDATE: April 2016. Great news! The Pioneers’ effort, and my “discovery” made several people very happy and made it to the front page of the newspaper!

2 Responses to Mysteriously Misplaced Headstones in the Cupertino Hills