Posted on August 2, 2014 by AlphaRoaming

The Lake Tahoe region is known as a “wonderland” for year-round recreation. It’s also known for it’s crowds! Just 22 miles north-west of Truckee lies one of the most pristine lakes in the West. It’s about the same size as Donner Lake, if you’re familiar with that (~3 miles long) http://www.nature.org/ourinitiatives/regions/northamerica/unitedstates/nevada/placesweprotect/independence-lake.xml

The Nature Conservancy purchased this entire lake from a private owner a few years ago and it’s open to the public…with some precautions to keep it pristine!

Because the former private owners ensured limited access, Independence Lake does not have any invasive species and is only one of 2 places that has a natural (unstocked / naturally replenishing) population of Lahontan Cutthroat Trout. (Fishing is allowed with some restrictions. The Lahontan Cutthroat Trout is “threatened” under the Endangered Species Act and must be released. http://www.nature.org/ourinitiatives/regions/northamerica/unitedstates/nevada/independence-lake-fishing-information.pdf)

Damaging invasive species, such as snails, mussels, and plants, often hitch rides on watercraft. Because of this, no outside watercraft are allowed. HOWEVER, the Nature Conservancy generously provides a handful of kayaks on a first-come, first-serve basis to the public (and motorboats on alternate weeks). There is no charge for these watercraft, but I would encourage putting a donation in the little box on the sign board. (A rented kayak elsewhere, without this pristine scenery, would cost about $30.)

The posted hours are 7:00AM – 7:00PM in the summer season. I visited on 2 weekdays in late July. One day there was an ample supply of kayaks (I was the only one on the water until about 10:00AM). The other day had a flurry of activity from an educational group and all the kayaks were taken well before 10:00AM.

If you’re a landlubber, or get there late, you may enjoy a hike along the shore. The northern shore is a truck road and the southern shore is a bit rougher, from the bit that I saw. I don’t think they connect at the far end. 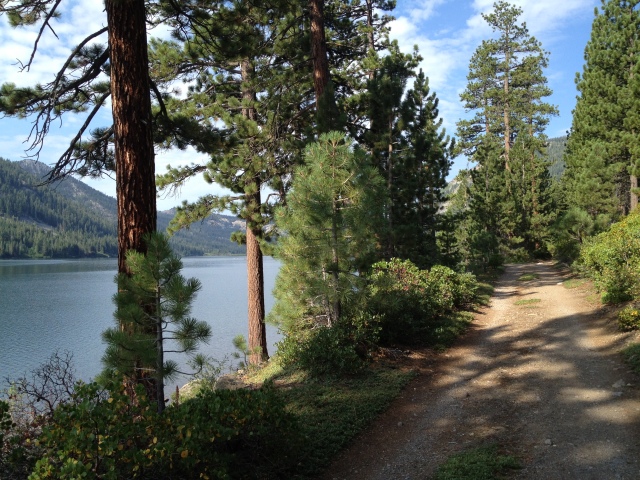 Park at the designated area, and walk towards the caretaker’s cabin and sign in!

At one time there was a hotel and cabins here. One old building remains, besides the new caretaker’s cabin: 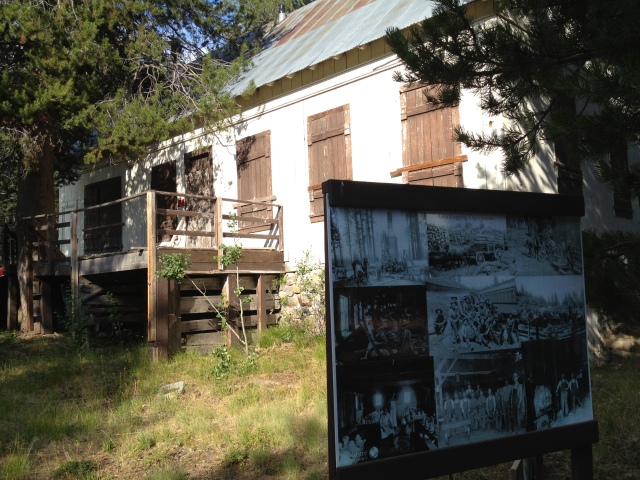 Walk down to the shore, a few hundred yards, and off you go! (FYI: There’s nobody to help you with the equipment, teach you to kayak, or to rescue you if you get in trouble! Wear the lifejacket and know what you’re doing. Watch for thunderstorms as well.)

In the early morning the water was incredibly still! The breeze typically picks-up later in the morning, giving you a small tailwind for your return…or a headwind on your outbound direction if you sleep-in and start late)

I kayaked the full length of the lake (approx 2.5 or 3 miles). While resting at the far end, along the left shore, I was “buzzed” twice by a bald eagle. Unfortunately my camera was stowed-away in a dry bag at the time. It wasn’t the first time I’ve seen one, but definitely the best!

Around 10:30AM I started seeing “classic Sierra thunderheads” rolling towards me from behind the peaks to the right. I made my return to the launching point, and started walking towards the car and BOOM! …at 11:15 I heard the first nearby crack of thunder. What a great experience!

These directions are excellent (bottom of this page): http://www.nature.org/ourinitiatives/regions/northamerica/unitedstates/nevada/placesweprotect/independence-lake.xml Write them down, or take a screen shot, as your phone will be “off the grid” after you leave Truckee!

The Nature Conservancy recommends a high clearance vehicle, which I agree with. I drove the road when it was dry and had no problems in my normal 2WD sedan. Take it slow and watch for protruding rocks, where you should be experienced at putting your wheels on the high spots, not in the low spots.

Getting to Independence Lake from Interstate-80/Truckee, CA:

•Exit I-80 to Route 89 North – Sierraville.
•Travel approximately 15 miles North on Highway 89 to Independence Lake/Webber Lake/Jackson Meadow Reservoir turn-off.
•Turn Left/West off of Route 89 toward Independence Lake/Webber Lake/Jackson Meadow Reservoir.
•Bear left and stay on paved road for 1.5 miles. Turn Left/South at sign for “Independence Lake – 5 miles.”
•Continue approximately 5 miles to Independence Lake. The road becomes a rough dirt road. High clearance vehicle advised. After roughly 2 miles you reach a fork in the road and a sign for “Independence Lake – 3 miles.” Take the RIGHT fork of the road. After approx. ½ mile there is another fork, follow the LEFT fork across a stream. If you do not drive across a stream soon after taking this left fork, you have made a wrong turn. Continue along this road going roughly south.
•Follow the directional signs to the parking area.

Looking back after turning west off of Highway 89: 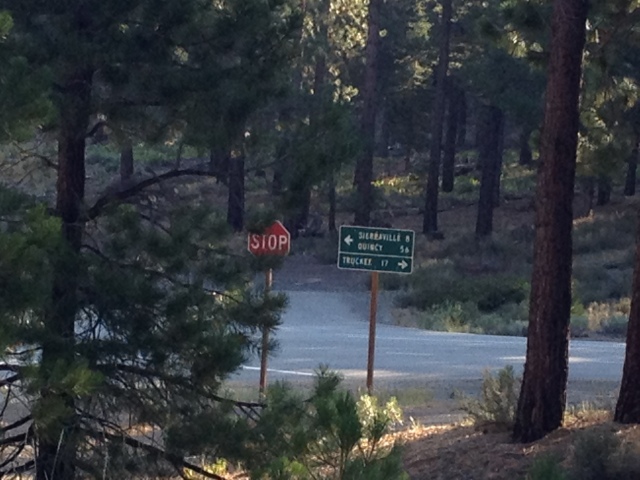 OK spelling geeks, how many times does the letter “A” appear in the name of this lake?

This is the creek crossing mentioned above. It’s easy if it hasn’t been raining recently. Just about 2 inches deep with some solid coarse gravel.

Typical section of the 5 miles to get there from Highway 89. Some sections are steeper and rockier than this:

That’s it! GET THERE EARLY if you want a kayak of your choice (and also to avoid possible afternoon lightning!)