Posted on October 5, 2013 by AlphaRoaming

Last day! The direct route back to Henry Coe HQ, and my car, was similar to my 2 previous days: roughly 12 miles, including one huge climb and lotsa smaller ones.

Dawn on the hills, from camp:

I packed-up a little more slowly than the day before (because I was warm!), and was on the trail before 8:00 in search of sunshine and a breakfast spot. It didn’t take long to find the sun as I climbed out of the lake valley.

Side-trip to Caviata Spring, which was flowing nicely at 0.7 liters/minute (measured and reported to the webmaster (http://coepark.net/pineridgeassociation/planning-your-visit/water-resources/water-conditions-springs):

More ”rollercoaster” hills on the Willow Ridge Road, and I soon passed the “famous and mysterious” steel ball.

The Willow Ridge Road rollercoaster hills were made a bit more “interesting” due the road having been graded recently. This means the former ruts now have very loose sand in them. With a tail-heavy rig, my steering control was not very good, so I took the descents very cautiously. This grading makes sense for the long-term, but it will also allow quite a bit of erosion this winter of the “loose stuff”. (Note: next time I may add a handlebar bag and put some of the cargo weight up front!)

Soon I reached the single track portion of Willow Ridge.

I stopped at the “normally-reliably-flowing-but-dry-now” Willow Ridge Spring and checked my messages. (I had been here before several times, so I looked forward to the shady bench and the AT&T 4G signal.)

Trail maintenance, before and after, tree across the road. It’s amazing how light a very dry log can be:

Down the hill into Los Cruzeros, I spotted my first human in almost 48 hours. A mountain biker stopped to chat on his way down the hill during his loop around to China Hole.

Up and over that climb, and down into Poverty Flats, where my final big climb awaited me. Henry Coe HQ and my car were now a few short miles, and 1500 vertical feet above me. As I sat and had some lunch in Poverty Flats, I waived at the first of about eight 4WD vehicles on their way to the private Booze Lake for the weekend. Most of them were quite polite, while others seemed clueless about the cloud of choking dust they were kicking-up as they passed me. None of them offered me a beer from their large coolers, though I flippantly asked one friendly driver if he was delivering my order…he was amused, but kept going.

I was rested-up in Poverty Flats, and had 1.5 liters of water left for the big climb. I mentally divided my water supply into the vertical feet I had to climb before I got to the new water tank at the top of the hill. OK, it’s going to be ½ liter for each 500 vertical feet. I wasn’t short of water, but it was something to look forward to and break the task into manageable pieces. I then checked my elevation, started broadcasting some iTunes for the first time in many weeks, and started pushing and pulling the “lighter-than-it-used-to-be” rig. 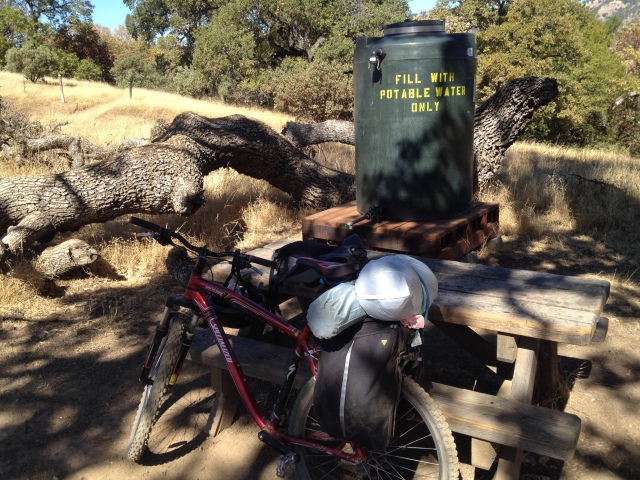 I stopped in the Coe office and chatted for awhile and bought a newly released 2013 Coe map and some cold drinks. I also bought a book written by Winslow R. Briggs, whom I had the pleasure of meeting and talking to last year at the annual Backcountry Weekend. He’s a famous Stanford biology “Professor Emeritus”, as well as a generous Coe volunteer. His many awards and publications include one presented to him by the Emperor of Japan relating to the research of photosynthesis. (State Park discussion starts at 16:20, and meeting the Emperor & Empress of Japan at 26:28 http://www.youtube.com/watch?v=T55JqEBSaq8 )

I talked with the 2 nice folks behind the desk about the changes on the new map. Of particular concern was the Lakeview Zone now being shown as “No Access”! I’ve been there 4 times, based on the marked trails on the 2006 map and it was beautiful! Similar to the “no bicycles in Orestimba” and “no camping at Dowdy” policies, I am curious how these decisions are made and how they’re documented. There’s no detail on the internet (isn’t “everything” on the Internet?), though it seems to be accepted as “coming from Sacramento”. Understanding the closure process and reasoning is a goal for another time…(yes, I know that the Rangers and several Volunteers may read this on FaceBook. “Hi! Any feedback and thoughts are welcome!”)

GREAT TRIP! I’ll have to do it again, and maybe even try one in the Mojave Desert, like the DryCyclist, who gave me serious thought and motivation to try such a crazy adventure!

A review of my gear: https://alpharoaming.com/2013/10/05/bikepacking-shakedown-cruise-equipment-gear-thoughts/