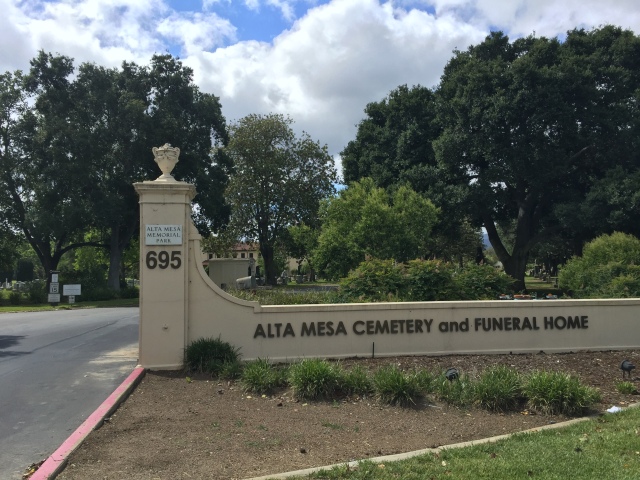 On my local bicycle rides and hikes I usually try to see something new.  I use topo maps, Geocaching.com, others’ trip reports, and just a bit of exploring trails or roads I’ve not been on before.

I recall when Steve Jobs passed away that he was buried in Alta Mesa Cemetery. I had not heard of Alta Mesa before then, but I took a mental note of it. Some recent surfing, plus my recent “mysterious headstones” adventure and blog post, put me back on the track to look into this a bit more.

A little bit of time on Google is all it took to read that Steve is indeed there, but the location is a closely guarded secret. One Italian blogger and visitor even thought a freshly dug grave, not too far from David and Lucile Packard, must be the spot. That was later proven to be false. (How’s your Italiano? https://www.youtube.com/watch?v=T6eEXrguymY )

Anyway…I did find that there are also other famous “residents”, including David and Lucile Salter Packard, Shirley Temple Black, and (the temperamental genius that brought the silicon to Silicon Valley) William Shockley.

It’s 72 acres, right near the corner of Arastradero and Foothill Expressway, but fairly well disguised with landscaping, except at the main entrance.

First stop was the main building, where there was a friendly receptionist on the right, and the Steve Jobs memorial book to the left. 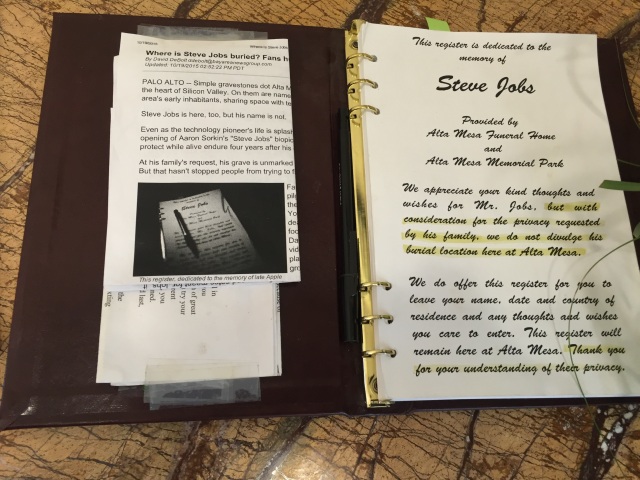 The receptionist confirmed that Steve’s spot was confidential, but was very helpful in giving me directions to the others.

Shirley Temple Black was my first stop. (Insert obligatory “On the Good Ship Lollipop” link here 😉 https://www.youtube.com/watch?v=WLLSqpYyPD8 ) Looking at the map below, the orange line is my route from the office (top) to the Adobe Creek Mausoleum (yellow highlighter).

Detail of the Adobe Creek Mausoleum below:

Out the back door, into the “Redwood Grove”:

Look along the wall on your immediate right:

Shirley Temple Black was a resident of nearby Woodside and was also the Ambassador to Ghana and Czechoslovakia later in life. https://en.wikipedia.org/wiki/Shirley_Temple (Why is a Seven-Up or ginger ale, with a shot of cherry syrup called a “Shirley Temple”?) 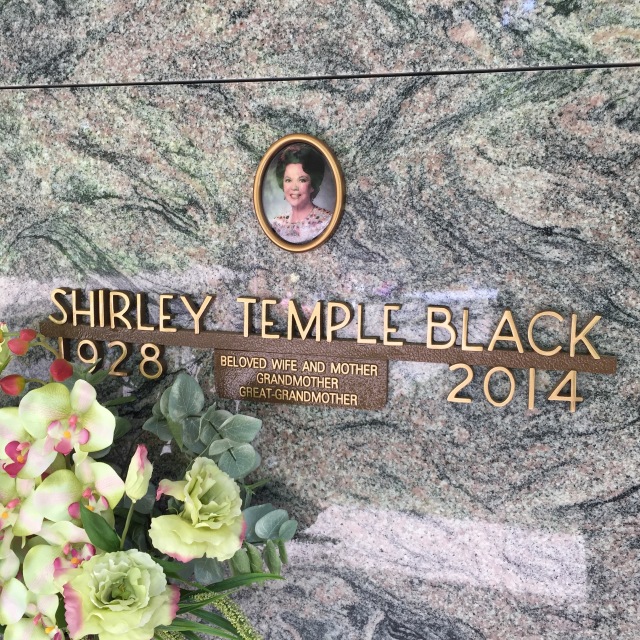 Next stop: William Shockley. Refer to the first map (above), with the blue building. Below is the detail of that blue building. (The receptionist smartly used different colored markers for each destination!)

Zig-zag through the courtyards to Section 8, in the back-left corner.

Towards the lower-left part of that wall, where my finger is pointing..

…lies the remains of William Shockley and his wife. I looked around on Google for the meaning of “W=SHOCKLEY” and could not find it.

William Shockley was a controversial character, who made major breakthroughs in transistor technology at Bell Labs, on the east coast, then later at his own company in Palo Alto.

Hewlett and Packard may have helped spawn “Silicon Valley” a decade or two earlier, but they built instruments, not silicon! William Shockley brought the silicon to Silicon Valley and his company spawned many other young companies and pioneers. https://en.wikipedia.org/wiki/William_Shockley

Speaking of Hewlett and Packard, David and Lucile Salter Packard are buried near the main office. In the image below: there are 2 redwood trees at the center and at the left side of this photo. Between the trees is the Alta Mesa office, and at my feet are “David and Lucile”!

And below is a touching sculpture in a section which I believe is for children.

That’s it! Come have a look around, if you want. 72 acres, non-denominational, founded in 1904. http://www.altamesacemetery.com/