And so it begins…the huge new Apple “Spaceship” campus

Posted on December 6, 2013 by AlphaRoaming

The huge Apple “Campus 2” was fully approved a few weeks ago by the City of Cupertino. Steve Jobs’ presentation to the City Council was his last public appearance back on June 7, 2011: http://www.youtube.com/watch?v=gtuz5OmOh_M

4 stories, 2.8 million square feet, and 2/3 the size of the Pentagon (and much more attractive!) http://www.gadgetreview.com/2013/04/10-fun-facts-about-apples-new-headquarters.html

Recently I noticed they were not just doing chain link fence, but erecting a huge ~20 foot perimeter wall. This wall is not permanent, but close to it! They’re driving posts deep into the ground and installing very heavy and thick wood panels. It will certainly prevent prying eyes and any possibility of trespassers climbing over the slick facade. “Now is the time” I thought, to take some pictures, as the only other way to see this landmark building under construction is to get a construction job or buy a drone!

I charged-up my iPhone, got on my bicycle, and decided to see what I could see before the wall totally blocked everything. I strolled on the public sidewalks and occasionally stepped through the landscaping up to the fence for a picture. I waived and said “hi” to the occasional worker who noticed me, and stopped to chat with a friendly security guard at a major truck entrance/exit. Nothing sneaky!

(I remember about 10 years ago, at a different company’s project, a security guard told me I couldn’t take pictures from a public sidewalk. I said “Really? Call the Police, I’ll wait here.” He mumbled something and skulked away.)

2 guys up there, guiding a heavy wood panel into the iron posts: 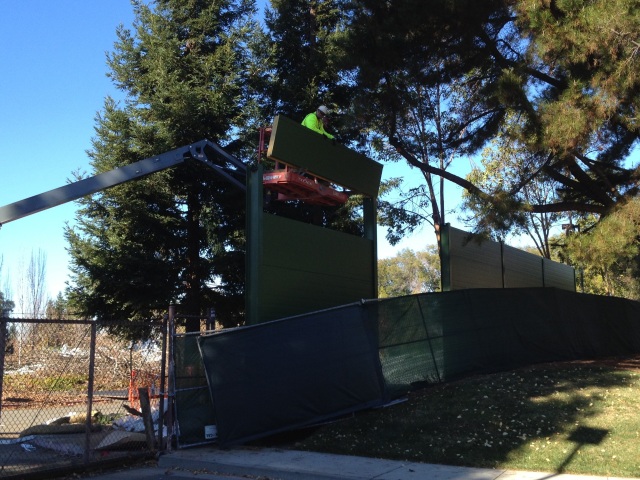 Pretty green wall. “Move along, there’s nothing to see here!” on Pruneridge Avenue. 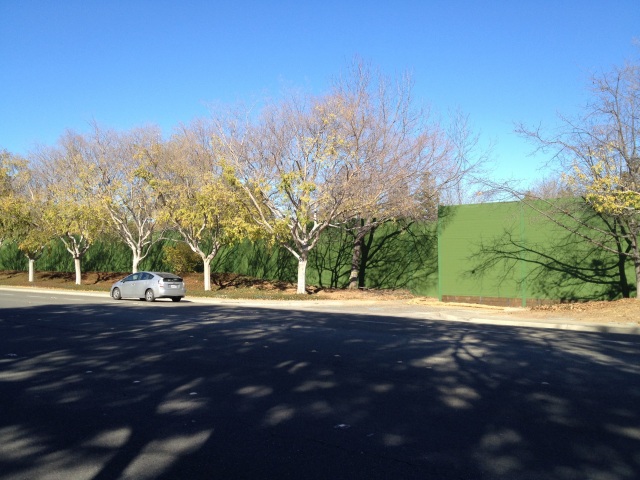 History? Yes, we’ve got history. As HP has shrunken over the past 2 decades, Apple has grabbed their older office buildings, which comprise most of this site. Even prior to HP, you old-timers might remember Tandem Computer and Apollo Workstations.

The street sign to the rear of this photo is a minor cross-street called “Tandem Pkwy”.

…and this extensive parking lot at Wolfe and Homestead Roads, now being prepped for demolition, used to be the home of Apollo Workstations before HP bought them over 20 years ago. 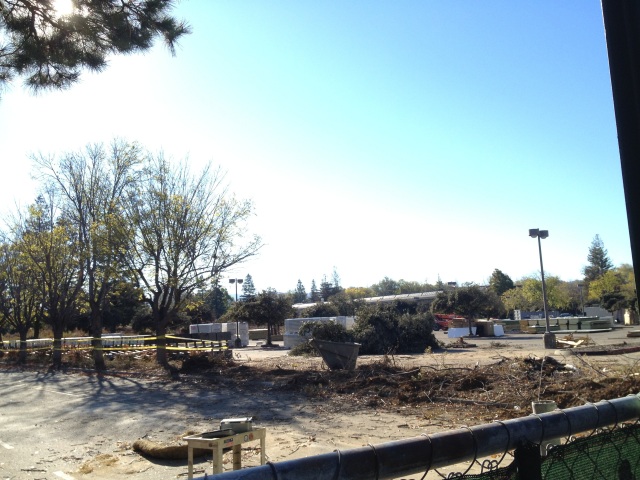 So, there it is, before the remaining shiny green walls go up. Stripping and prepping the buildings for demolition 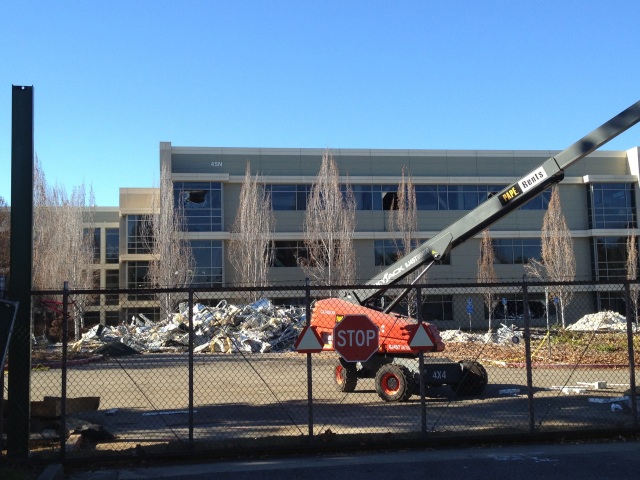 ..and some real “crunching” at the south end of the site, along Highway 280:

As a local resident, about 2 miles away, I have mixed feelings, but overall they’re positive. Indeed it will make my access to the highway more difficult, more crowding, etc. If everyone said “stop” as soon as they moved here, Silicon Valley would still be a farming community where we’d be growing prunes on Pruneridge Road instead of [dumb “Apple” pun deleted]

Also, since I conveniently live between Highway 280 (near Apple) and Highway 101, I can always go the other way and use Highway 101, uh…….right…where…the…new…49ers…stadium…is…being…built. Doh! Jammed in by “progress”!

The site is shown in the below view: bounded by I-280 on the south, Homestead on north, and Wolfe and Tantau on the west and east…with the exception of a Condo complex in the lower-left corner of that rectangle.