Posted on August 4, 2013 by AlphaRoaming 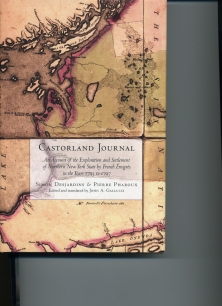 Most folks who live in the Adirondacks Mountains of New York don’t even know some of the unusual events in local history. I Just plowed through a book that’s been on my shelf for awhile “Castorland: French Refugees in the Western Adirondacks, 1793-1814” by Edith Pilcher Link: http://amzn.com/0916346552

Back in 1793 the “Compagnie de New York” was founded in Paris and stock shares were sold to a virgin 200,000 acre tract to be developed and settled in northwestern NY State. The shares sold quickly to investors and French nobility, both as land speculation, and a place to flee the violence of the French Revolution by nobility and “monarchists”.

The story centers around the failed colony, which never achieved more than 20 families. It started with an inaccurate map making them think they bordered on Lake Ontario for easy access and trade with Canada, when it was 2 days travel without a navigable river to get there. The advertising literature, created in Paris, took the best aspects of NY State and assigned those same characteristics to this remote tract, with the harshest weather in the region (-40F in winter). It was the same latitude as balmy southern France!

Though the French nobles, fleeing the guilloutine, settled in many places in the New World, most of them were not used to hardship or the hard work which had formerly been done by their servants in France. A few adapted, including Simon Desjardin, who led the fledgling settlement. His hardships and pace of progress was quite slow, and he was eventually replaced by a Swiss investor who “managed” the colony from the comfort of New York City. The unplanned hardships, mismanagement, plus Napoleon Bonaparte welcoming nobility back to France in 1802, sealed the colony’s fate. Many French settlers continued arriving in North America, but they were predominantly peasants and/or settled inurban areas.

Desjardin’s journal, combined with other historical entries, also interestingly shows cultural clashes with the French nobles. They were used to much more gracious hospitality and gentlemanly business dealings than the Americans offered. Their commentary was quite a contrast to the more famous and enthusiastic writings, a few decades later, of Alexis de Tocqueville http://en.wikipedia.org/wiki/Alexis_de_Tocqueville

The author does a great summary reviewing and correcting historical literature, which primarily is Simon Desjardin’s journal, which was found at a flea market in Paris by an American in 1862. It’s now translated and available: “Castorland Journal: An Account of the Exploration and Settlement of New York State by French Émigrés in the Years 1793 to 1797” by Simon Desjardins Link: http://amzn.com/0801446260

If you like early frontier or Adirondack history, I recommend it.